Once again, Club members (and their families) came out on May 5th to make lunches for the competitors at the Special Olympics. Thanks to all the Ballard Rotarians and their family members who helped!

A special guest at the April 30th 2019 club social was Parker Costa. Parker graduated from Bainbridge High School and won a Ballard Rotary scholarship to the Maritime Academy. His goal is to become a captain in the Washington State Ferry system.

When he completes his course at the Academy he'll qualify as an able seaman, and will head off to a summer internship. He hopes that will be the start of his 10-15 year journey to ferry captain. Along the way, he has learned firefighting, knot-tying, navigation, drills and ship diagrams, spill clean-up and much more. 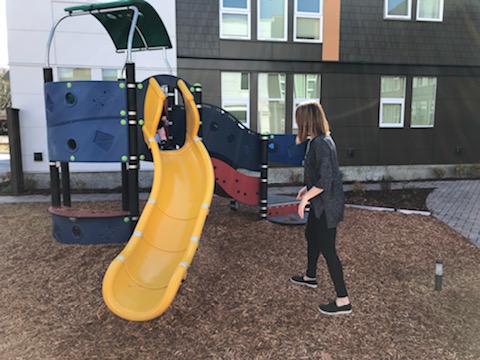 On April 12th President Chris and Kathleen Davis were honored for Rotary's contribution to the stunning affordable housing community in the Broadview neighborhood.

Compass Housing recognized its many partners in building the new facility that will house 59 families (including some of the 42 homeless students currently attending Broadview Thompson K-8 School). The primary partner is the Lutheran Memorial congregation which provided the site (formerly a parking lot). Other partners included the Broadview Thompson School, the City of Seattle, financing agencies and Comcast.

Ballard, along with with other area clubs, provided funding for the kitchen and furniture for the common areas, where classes, tutoring and celebrations will happen. There will be many opportunities for Ballard Rotary to continue the partnership, through tutoring kids and supporting community celebrations.

Ballard Rotarians Marilee Fuller, left, and Kathleen Linscott get ready to clean up the Interurban Trail in the Fremont neighborhood.

As part of a District-wide project on April 13th, Rotarian Stan Miner of the International District Club, organized trail clean-up on the stretch of the Interurban Trail from Woodland Park to Fremont. In this area, the trail runs along Phinney and Fremont Avenues.

When Stan invited Ballard Rotary to join his team, a couple Ballard Rotarians jumped at the chance. Armed with litter-grabbers and huge yellow trash bags, the crew headed out on a rainy, windy Saturday morning. They were pleased to be assigned short, three block stretches of trail. They found neighbors to be pretty litter-adverse, and weren't able to find all that much trash to pick up. The 12 Rotarians finished before noon with a hearty lunch provided by Stan.

Kathleen Davis and our Guatemala Project

Kathleen Davis spoke at the March 26th club meeting on the state of our Global Grant project in Gautemala. She and Chris Davis began their visit in Antigua, Guatemala, a city in the central highland of Guatemala famous for its well-preserved Spanish Baroque-influenced architecture as well as a number of ruins of colonial churches. It served as the capital of the Kingdom of Guatemala. It has been designated a UNESCO World Heritage site.

People for Guatemala (http://www.peopleforguatemala.org/) is a community service organization that helps the people in in the local catchment area. They are indigenous people, mostly subsistence farmers. They offered scholarships to 99 students, and were disappointed that two of the scholarship recipients left with people smugglers (coyotes) with offers of a better life in the U.S.

Sanitation Before Our Project

Sanitation After Our Project

Teachers and students in the new computer lab

The computer labs had to be secured with bars on the windows and screens under the roofs. Parents hired a teacher for the computer lab. 60% of jobs require some computer skills. With limited internet access, they use a hard drive called Rachel where many resources are downloaded for use on multiple computers. They follow a national curriculum. The free Kahn Academy is also available on the Rachel. https://www.khanacademy.org/

Thanks to all that contribute to the International Rotary Foundation that makes all this possible.

Oly Wise thanked Kathleen Davis for all the grant work she does. Thanks Kathleen from all of us! Oly mentioned TINFA – Technology and Information for all by supporting teachers. http://tinfa.org/

Susan Haris asked if violence is causing the emigration. Kathleen’s response was that it was poverty and lack of opportunity that caused them to leave this area.

Guatemala like most of Latin America has a social structure of systemic prejudice where people of European decent are the upper ruling class and there are few opportunities for the indigenous people.

Gifts from Guatemala for Ballard Rotary!

Kathleen and Chris Davis in Guatemala.

Ray and John painted one of the two bathrooms, but ran out of paint for the 2nd. Ray purchased paint the during next week and he and John came back for 4 more hours on the 19th to paint the remaining bathroom.

These Rotarians did a fantastic job.

The tireless crew of Rotarians helping bag food on January 14, 2019 at Ballard Food Bank for the Weekend Food for Kids program. From left, Steve Stansfield, Alan Hovland, and Erik Gulmann.

Val Gaifoulline, left and John Mitchell are ready to pair each student with a Rotarian

The Shopping Spree at Fred Meyer on December 1st was great fun, as usual, for both Rotarians and kids.  Fred Meyer staff put out a nice table for greeting club members, parents and their kids. Fred Meyer staff were also a huge help with discounts and shopping tips.

Community Service Chair John Mitchell reported that four students did not show up--the remaining gift cards will be given to counselor Sue Clauson at Whitman Middle School to disburse to those in need.

The project: Food for Kids

Tonight was a work-out.  4:30 to 7:00.  The Food Bank was closed when we left.  480 children in our local neighborhood need the little kind hope we are fortunate to provide.

Dr. Steve, Joseph and I were helped by the wonderful Sofia, a Lakeside Student.

I am very happy that I am able to do this work to help children.  When you have completed the peas and are on the 240th of the second item, it helps to pause and remember the children who depend on your effort on a Monday night in a freezing warehouse with the big door open.  Dr. Steve took a moment to re-set his back tonight before continuing on.  He had no thought of leaving.

Next week yes.  And then two weeks off.

I am glad that I am in Ballard Rotary.

Report on our Guatemala Grant

At the October 16th meeting, Grants Chair Kathleen Davis reported that the computer labs and sanitation projects covered by Ballard Rotary's most recent Global Grant in Guatemala are mostly complete.

Toilets and sinks in primary schools

Al Hovland was a trooper at the Ballard Food Bank in August 2018, helping package food for kids' meals.

Upcoming Programs
01/07/2020: Bill Feldt, Federal Way Rotary Malaria Partners Program Bill Feldt will update us on the progress of the Malaria Partners Program in successfully eliminating malaria.
01/14/2020: Stephen Sundborg, President of Seattle University Fr. Sundborg, winner of the prestigious 2019 Seattle-King County First Citizen Award and a powerful and inspiring speaker, will speak on the topic of Civility.
01/21/2020: Sarah Sherer, Seattle Maritime Academy Sarah Sherer, Dean of Seattle Maritime Academy will update us on the activities at SMA, as well as the academy's current successes and challenges. We provide scholarships every year to this excellent institution, which is affiliated with Seattle Central College and is located in Ballard.
01/28/2020: Club Evening Meeting Club meeting 5:30 pm at Picolinos, no speaker is planned. Come and catch up on club activities in the relaxed ambiance of Picolinos!